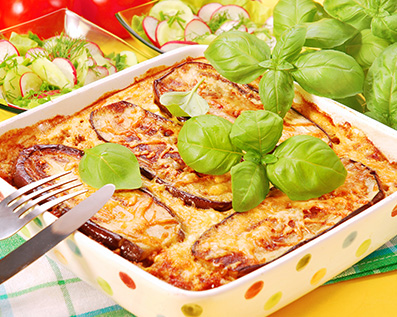 You may serve it with sour cream

Basis:
Peel an eggplant, cut it into 1 cm thick rings, add salt and leave it to stand in the strainer for half an hour. Peel the potatoes and cut them into 1 cm thick slices. Then wash the eggplant, drain the excess water and dry with a towel. Fry in oil until golden brown. Place on paper to drain excess oil. Do the same with the potatoes. Fry and place on paper. For an easier process, the vegetables can be sprayed with oil and baked in the oven at 200 C, until they soften.

Minced meat sauce:
Heat the pot, add olive oil, onion and garlic, then peeled puree and minced meat, breaking the lumps. Add red wine and wait for it to evaporate. Add tomato juice, sugar, cinnamon, cloves, bay leaf and spices, and pepper. Leave on low heat for half an hour, until cooked through. After that, remove the bay leaf, cinnamon and cloves.

Preparation:
Coat the pan (25x35cm) with butter, then arrange a row of potatoes so that there are no gaps, then a row of eggplant, and sprinkle with grated Kefalotiri cheese. Then put all the minced meat sauce, spread it evenly everywhere, add bechamel to it and sprinkle with gravier cheese. Bake in a preheated oven for 60 minutes until a crust forms. Leave to cool for half an hour, then serve.

Find out more or adjust your settings.

This website uses cookies so that we can provide you with the best user experience possible. Cookie information is stored in your browser and performs functions such as recognising you when you return to our website and helping our team to understand which sections of the website you find most interesting and useful.

Strictly Necessary Cookie should be enabled at all times so that we can save your preferences for cookie settings.

If you disable this cookie, we will not be able to save your preferences. This means that every time you visit this website you will need to enable or disable cookies again.